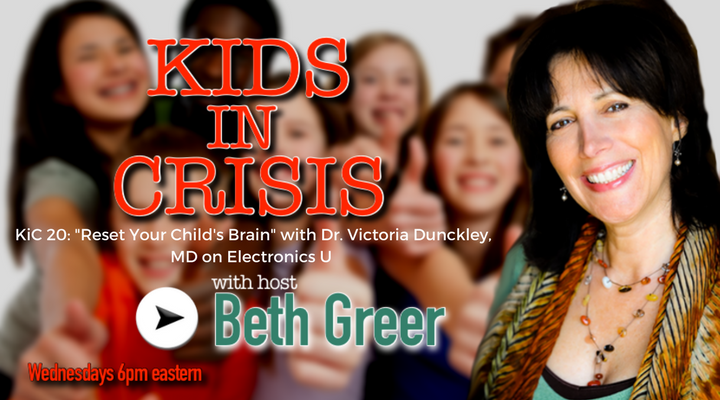 Listen on iTunes. (And while you’re at it, why not Subscribe to the show!)

If you’ve been listening to my show you know that ADHD, autism and tic disorders are on the rise. Listen to these statistics: Between 2002 and 2005, ADHD medication prescriptions rose by 40 percent. 1 in 10 American kids has been diagnosed with ADHD, and more than half got their diagnosis before age six.

Mental illness in children represents half of all health insurance claims filed in 2012, compared to just 5 to 6 % of claims 20 years ago. 1 in 9 kids has seriously contemplated suicide, and 1 in 8 teens suffer from depression.

What’s going on here? What if this is not some mysterious new plague, but is environmentally caused?

My guest, Dr. Victoria Dunckley, MD, is one of the leading psychiatrists practicing integrative, holistic psychiatry with children. She is a prominent and award-winning voice for greater understanding of the effects of electronic screen media on the developing child’s brain. She practices in Los Angeles and has been a featured expert on the Today show, NBC Nightly News, NPR, and the Investigation Discovery Channel.

Here’s a passage from Dr Dunckley’s  book, Reset Your Child’s Brain: A Four-Week Plan to End Meltdowns, Raise Grades, and Boost Social Skills by Reversing the Effects of Electronic Screen-Time

If we ask ourselves, ‘What has been the biggest change in our children’s environment compared to only one generation ago?’ the answer is not gluten, pesticides, plastics, or food dye (all offenders of mental health, but they do not constitute the biggest change in one generation)… [the answer is] the advent of the Internet, cell phones, and wireless communication. The constant bombardment from electronic screen devices [may be causing] the young brain to short‐circuit.”

In the years that I’ve been doing healthy home consults inside people’s homes, I’ve encountered — without exception — very high EMF fields, either in just one or two rooms in a house or apartment, or the entire place. This is troubling to me. And the children are the ones who are most impacted.

From the baby who wasn’t sleeping because her crib was up against a wall with a refrigerator on the other side, to the boy who had headaches for 2 years and when I measured the fields coming off his air purifier, I was astonished. And his headaches went away the next day when I moved the device 6 feet away from his bed.

Or the little girl who waited for her oatmeal each morning when her mom microwaved it, not realizing the unit was under a countertop and the child was sitting right in front of it. Microwave ovens emit very, very high fields up to 3 feet away.

I use an EMF measuring device and wall filters to help mitigate these fields. You can learn more about this on my website, SuperNaturalMom.com under Recommended products.

In this episode you will hear:

THANK YOU FOR LISTENING!

To get more Kids in Crisis content sent directly to your device as they become available, you can subscribe on iTunes!