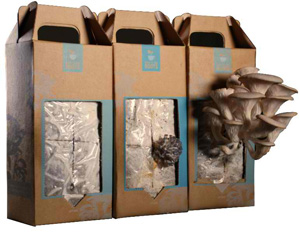 What if you could take 1 million pounds of waste that was heading towards landfill and repurpose it to grow food? Well, that’s exactly what two recent UC Berkeley graduates are doing with their company Back to the Roots. Founders, Nikhil Arora and Alex Velez started a 100% sustainable urban mushroom farm that transforms coffee ground waste into the growing medium for gourmet mushrooms. The 2 year-old company is on pace in 2011 to collect, divert and reuse 1 million lbs. of used coffee grounds, from Peet’s Coffee & Tea, a San Francisco Bay Area company, and use it to grow over 250,000 lbs. of gourmet mushrooms.

They got the idea during their last semester at Berkeley in 2009. The two 23-year-olds had the intention to go into investment banking and consulting, but became intrigued, during a business ethics class lecture, with the idea of being able to grow gourmet mushrooms entirely on recycled coffee grounds. They walked around to local cafes and collected used coffee grounds, put them in paint buckets and seeded them with mushroom spawn. The experiment, to their delight, led to one bucket of pearl oyster mushrooms. They then saw the potential of these mushrooms… to turn waste into wages, as well as provide fresh, local food to their community. 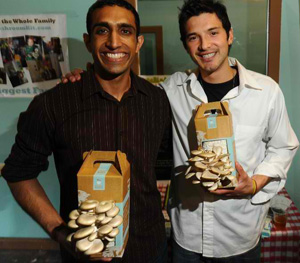 “We knew nothing about what a good gourmet mushroom should taste like, so we thought, what’s the best restaurant in town?” said Nikhil during a recent interview on my radio show “Your Super Natural Life.” Chez Panisse, the acclaimed Berkeley restaurant, wasn’t too far from their campus, so they walked their bucket of mushrooms over and its founder Alice Waters happened to be there that day. She got excited and got her head chef involved, who immediately sauteed them, tasted them, and declared that the mushrooms were great. That same day, the guys walked into their local Berkeley Whole Foods Market and the produce buyer was excited about the idea and Whole Foods became a client. Two weeks before graduation they received a $5,000 Grant for Social Innovation. The guys, who graduated Summa Cum Laude from Biz School, changed direction at that moment. “We looked at each other and said, let’s forget investment banking and consulting and become full time mushroom farmers,” said Nikhil.

Most mushroom growers use wood shavings or sawdust, and many import the growing medium from China where they’re cutting down trees just for the purpose of growing mushrooms. Plus, about a third of the energy costs for growing mushrooms is sterilizing the growing medium. Coffee grounds have already been sterilized by having boiling hot water poured over them, and are also rich in cellulose, making them a superior growing medium. In addition, when coffee grounds go into landfill they create a lot of methane gas, affecting greenhouse gas emissions, and they take up a lot of space, so it’s a win win all around. 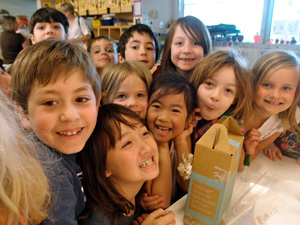 But there’s more…Back to the Roots is repurposing its own waste. After the mushrooms are grown on the coffee grounds, what’s left over becomes a wonderful soil amendment, which Alex and Nikhil are now selling to Whole Foods and donating a lot of it to school gardens and non-profit farms. A handful adds amazing nutrients to plants and flowers. They are also producing Grow at Home Mushroom Kits and are hope to inspire people to grow their own food. The mushrooms appear in about 10 days, right from the box, and produce about a pound and a half of gourmet mushrooms. Over 300 Whole Foods are selling them. (Greenopolis readers can get a 10% discount online by using the code “greenopolis10” on the Back to the Roots website).

In two years the company has grown from an idea to having a 10,000-square-foot warehouse in Oakland, CA and a staff of 14. It is one of the most innovative, socially conscious, green businesses I’ve seen. It’s no surprise that in 2010 its founders were named BusinessWeek’s “Top 25 Entrepreneurs under 25.” Future plans? They’re experimenting with using soy pulp and tea waste. But they really see their company as more than an urban mushroom farm. They want to inspire people and create awareness about waste, sustainability, and growing their own food. Also, check out their school campaign on Facebook. Anytime anyone posts a picture on their facebook page with their fully-grow kit, BTR will donate a kit and sustainability curriculum to an elementary school classroom of their choice.