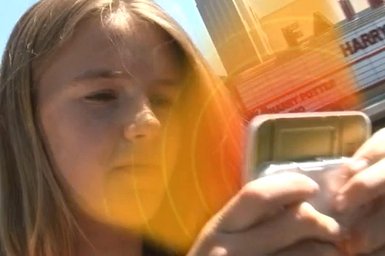 Cell phone use among children is a massive uncontrolled experiment on the brain. So says Devra Davis, Ph.D., award-winning scientist, writer and founder of Environmental Health Trust, a nonprofit devoted to researching and controlling avoidable environmental health threats. “Children’s skulls are thinner and their brains are less dense so there’s more absorption of radio frequency signals,” she said at a recent event in San Francisco where she spoke about the Campaign for Safer Cell Phones. She added that we don’t know the long term effects of using cell phones, and that the FDA has never tested cell phones for safety. “If cell phones were a pharmaceutical drug,” she said, “they would never have gotten to market.”

Studies from around the world are now being released with some startling news about using cell phone safety. A Swedish study reports that radio waves from mobile phones penetrate deep into the brain not just around the ear. Researchers found that using your cell phone for 10 years or longer will double the risk of getting an acoustic neuroma – a tumor on a nerve connecting your ear to your brain – and children, because they have thinner skulls than adults and nervous systems that are still developing, are particularly vulnerable to it. Other scientists warn that there is a 420% greater chance that young people who start using a cell phone before age 20 will develop a brain tumor later in life.

But it’s not only long term use of cell phones that’s of concern; short-term use also can have adverse effects. Scientists at the Spanish Neuro Diagnostic Research Institute in Marbella have discovered that a call lasting just two minutes can alter the natural electrical activity of a child’s brain for up to an hour afterwards. Doctors fear that disturbed brain activity in children could affect their mood and ability to learn and lead to psychiatric and behavioral problems.

Britain’s advisory body on radiological hazards, the Health Protection Agency has urged parents to limit their children’s use of cell phones, recommending that younger children use cell phones only in emergencies. But, here in the U.S. there are no precautionary guidelines and toy companies are teaming up with wireless companies and going after kids as young as five.

More than half of American teens aged 13-16 have a cell phone and now. Most of them aren’t just using their phones to talk. They’re text messaging, taking pictures, playing video games and surfing the Web, which opens up a whole new set of concerns. I was also shocked to hear from friends that their teens sleep with their cell phones under their pillows at night. That’s an additional 7 to 8 hours of radiation going directly into their brains!

It’s not realistic or practical to give up our cell phones, but here are some suggestions on using them more safely:

Here’s a video aimed called “Cell Phones: Just Like Cigarettes?” that you and your teen might enjoy watching: (below). If you’d like a landline phone using no electricity, check out www.oldphones.com.

Beth Greer, Super Natural Mom™, is the bestselling author of Super Natural Home as well as a radio talk show host and impassioned champion of toxin-free living who busts open the myth that our homes are safe havens. Beth is a columnist for The Washington Times Communities, Greenopolis.com and NaturallySavvy.com. Follow Beth on Twitter. Become a fan on Facebook.